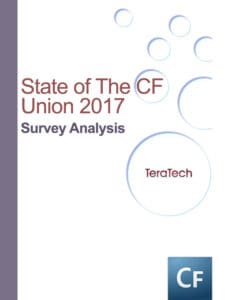 We have run the State of the ColdFusion Union Surveys for nearly 10 years now. This year was particularly inspiring. And interesting results too.

And special thanks to Brad Wood who helped me edit the survey questions and reviewed the results with me in two webinars. We have summarized all the ColdFusion analysis and commentary in this 72-page report. Highlights include: