Rakshith Naresh talks about “ColdFusion 2021 Revealing Details on How it was Created” in this episode of the CF Alive Podcast, with host Michaela Light

When will the first hot fixes come out?

Michaela Light 0:01
Hey, welcome back to the podcast. I'm here with rack chic. Naresh, who is the senior product manager for ColdFusion at Adobe. And we're going to be talking about cold fusion 2021 that just released a few weeks ago. Very exciting. And he is the man who talks to all the cold fusion customers figures out what new features to have decides the future of cold fusion among with all the other people in the Adobe team. Welcome Rakshit.

Rakshith Naresh 0:29
Thanks a lot, Michaela. It's great to be a part of CF Live podcast again.

Michaela Light 0:34
Yes. Great to have you back. I wish we were talking in person like we did in India last year. But unfortunately, this year has been a bit weird. But the ColdFusion team, Adobe persevered through the lockdown and the kroner and the economic craziness, and managed to get ColdFusion 2021 out before CF summit, which was last week. So congrats on that.

Rakshith Naresh 1:02
Thanks a lot. Yeah. And congratulations to all of us on this new release.

Michaela Light 1:06
Yes. And thanks to all the beta testers in the ColdFusion community who helped out with it, too. I know there were a lot of how many people were on the beta test, you know,

Michaela Light 1:20
yeah. Yeah. Wow. Now, what we're going to talk about today is, we're going to talk about, like, an overview of what's in there, but there's so many new features in this release that I don't think we can do it justice in one episode. So we're gonna have to come back to you or other team members to dig down in detail on some of that stuff. Is that cool with you? or?

Rakshith Naresh 1:43
Yeah, absolutely, we can do that.

Michaela Light 1:46
Okay, but let's, what we're gonna cover today is we're going to have a look at an overview of what's in there, we're gonna look at some of the story of, you know, how you guys got this out in these trying circumstances this release, and also why the name of the release changed at the last minute. And then I've got some questions that CFS have sent me online through the ColdFusion programmers Facebook group. So we'll have a look at those two, because a lot of people are really interested in this new version of ColdFusion, and are curious about some of the new features and the new licensing or old licensing they didn't realize was. And you know, the move to the cloud and microservices and so on. So that's the plan for the episode. So let's dig right in. Let's just talk about what you know what what is in ColdFusion 2021? What are the new things I keep hearing the word cloud? And I don't know if I know you have a vision statement for it. I don't know if you have that ingrained in your brain because Ashish has been repeating it daily.

Rakshith Naresh senior product manager for ColdFusion at Adobe. He decides the future direction of CF there. 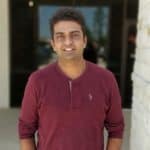