Did Sauron try to kill ColdFusion? I’m here to show you that the dark forces of Mordor failed. That CF is a vibrant and modern language for complex, data-driven enterprise apps. While some companies have abandoned ColdFusion as dying, more visionary dev teams have embraced modern CF. Learn how they are making it the most modern, secure and state-of-the-art web development ecosystem. Bar none.

Join the CF Alive Revolution and you can: 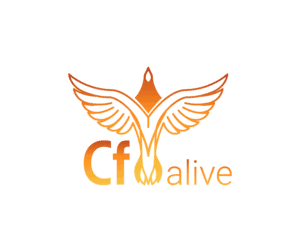 Together we can make CF more modern, vibrant and secure this year!

In all reality, TeraTech has never had any problem finding CF developers and projects. For others, it was a different story. We sent out our annual survey, “The State of the CF Union”, and the answers we received were shocking.

The biggest concern we received was that CF was dead/dying/legacy. That’s what got me motivated. I wanted to help rebuild the state of ColdFusion and the community’s perception of it. So, the CF Alive revolution was born!

In the State of CF Union Survey (Amazing Final Results & Analysis) I asked:

What aspects of CF are preventing you or your company from embracing CF?

The top concern, which was given by 72% of the participants, say that is is because CF is seen as dying/legacy.

(The next concern about being attacked by Orcs at Helms Deep was a distant second...)

I am committed to changing this false perception of CF dying, in both the CF Alive book, Inner Circle group and the podcast!

Sometimes it seems that ColdFusion is being targeted by one of those old Wild West Wanted Posters that say “Wanted, Dead or Alive, CF - Reward”: 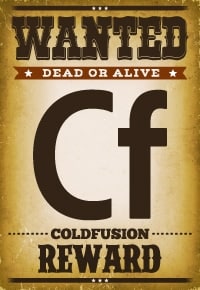 Some naysayers (and Orcs) have said that ColdFusion was dying for the last 10 years. But it is not only still Alive; it is thriving and is now the most modern and secure web development ecosystem. Learn details on why CF is Alive in the book and how you can be a part of making it even more so this year.

CF never went away. Some people might have said it was doomed but you knew in your heart that it would be triumphant in the end. This actually says a lot about the quality and experience that CF developers have developed over the years!

ColdFusion is a vibrant and modern language. I invite you to discover how in the upcoming chapters. We are proud that it is thriving and is the most state-of-the-art, reliable and secure web development ecosystem available. Bar none.

We are confidently coding easy to maintain apps in CF. Enlivened by using a tried and trusted language. Unleashing the full efficiency of using ColdFusion in our work. We inspire other developers and young programmers to explore the power of CF.

ColdFusion is sometimes considered less cool and less “sexy” to code in, unlike some other newer languages or even the languages that are a similar age to CF such as PHP and Java. Developers often have a shame-y tone when talking about CFML. It is one of the main reasons for the CF’s dying threads. This is a roadblock for re-establishing CF as a leader.

Once more CFers are proud of using and sharing their achievements with CF on blogs and social media, this will improve. By evangelizing what you have created in CF and publishing packages on ForgeBox or GitHub, CFML will also become more popular. It is wrong to think that one should be just humble and do your thing without self- promoting and standing up for CF when it is questioned. You’re promoting not just yourself but also advocating for CF, and thus making sure ColdFusion stays alive.

“I'm proud to use ColdFusion. I've built a successful company on ColdFusion...the bottom line is that ColdFusion enabled me to build an application that sells, and sells well. I built other companies on other languages, and those companies no longer exist. So if you judge success by who brought you there, ColdFusion brought me here.” - Thomas Grobicki, CEO of Avilar Technologies, Inc

From CF Alive episode, "041 The true ROI of ColdFusion (How to Sell CF to your Boss or Client) with Thomas Grobicki"

For too long we have avoided sharing the cool projects we are working on with other developers. For years we have been stuck using old and insecure versions of CF, not feeling heard by our bosses about upgrading to new versions. Stuck in our CF skills,  falling further and further behind the cutting edge. Worried about career opportunities, salary stuck due to working on CF legacy apps, staying in the same position for years on end.

Sometimes CFers have felt alone doing legacy CF coding; that they are not part of a supportive community. That even their bosses don’t hear our challenges about using old versions of CF or old development techniques. There is never enough time or budget for training or doing things right. But always enough time to do it over or band-aid bug fixes.

So we keep slogging along with old-fashioned CFML. We can’t give up, too near to retirement for that. Even though we can’t see light at the end of the tunnel. Yet.

We have been afraid that we are stuck on the “CF Titanic”. That it is slowly sinking... and it is too late to get in a lifeboat (to the supposed safety of “a different ‘cool’ language”). We lack the time and resources to build that lifeboat on our own. That CFML is no longer seen as cool and the computer press doesn’t care about it.

Our worst enemy has been our own negative mindset about CF dying and legacy paralysis.

Some CFers have “legacy ColdFusion fatigue”. Perhaps they are avoiding learning new tools and methods, afraid to even try. How can we be re-invigorated learning modern CF methods and features?. Let’s find again the excitement CFML coding and feel that it is “cool” once more.

Every year they have hoped that someone else will improve CF. But things just seem to get worse.  So they just knuckle down and keep working on legacy CF maintenance.

Depressed about ColdFusion is Dead threads. Apathy from flame wars in CF community and haters who left but keeping coming back to snipe.

When CF first started with Allaire it was exciting, the cutting edge of web development. We used to feel that we had a voice and mattered and could influence the direction of CF. Now everything is corporate and slow moving.  I know that people in Adobe are trying to change this and improve this. WWIT for this to happen sooner?  (* WWIT = What Would It Take)

That decisions about CF are made further and further away from us. They don’t listen. We as a CF community are constantly working on improving the CF and I believe that by working together with Adobe and Lucee, this might be a lot easier, faster and more efficient.

We have had enough risk avoidance and playing it safe. We are not afraid of rocking the corporate boat in order to reach the promised land of CF Alive. We have overcome thinking that every new programming language is the cool kid on the block, kicking dirt in the face of CF.

We brush Fake FUD (Fear Uncertainty Doubt) from other software manufactures off our shoulders.

What is the reward if you capture modern CF from that Wanted poster? ‘

Imagine your software engineering team was just 10% more efficient using modern CF. What kind of business results would that drive? Can you quantify it?

Here are more questions to get you the rewards of modern CF Alive:

Now that you have read this book and seen all the ways that ColdFusion is alive, modern and secure I invite you to join the CF Alive revolution.

There are several ways you can do this: 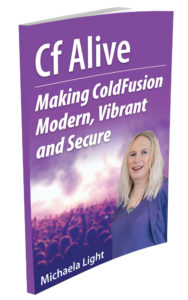