Have you ever started a project when you felt that it’s not planned carefully and you were just waiting for something to go wrong? Key analyst gets sick, lead ColdFusion developer has to work on another project, everyone needs to wait one week for the server to get set up. Or maybe the data from the old system is corrupt which will push the deadline ANOTHER week…

Another scenario is when you’re in the middle of a big project that’s key to the organization and it seems that everything is according to plan – milestones are delivered within deadlines and budget is met…All is well until you try to deploy it and then things get late, over budget, or the software doesn’t do what the users want to…

In this article, you’ll learn about different methods of planning.

We ran a webinar: “7 ways your Cold Fusion project can fail and what you can do to avoid them”

We sent out a survey to the participants (mostly developers) asking them “what planning is done on your project?” The following graph shows the results: 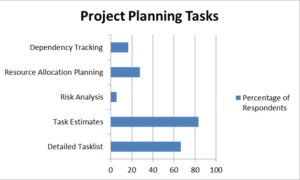 Many software teams do task lists and estimates. But very few people do risk analysis, look at dependencies or resource allocation.

In this article, I will go over each of those planning methods, explain why they are important and how to put them into practice.

If you don't keep track of who's going to be working on what and when, all kinds of unexpected issues can come up.

Tracking all your people resources will be useful. Just imagine you will know ahead of time if certain CF developers are busy with other projects or on vacation just when you need them. You’ll be able to see if anyone got an unrealistically large amount of work.

A spreadsheet of hours assigned to each person and project is enough for small projects (less than a man-year) or you can even use a whiteboard.

Track not only human resources

You might need to prepare budget or calendar for physical resources. This concerns servers for load testing, disk space for test data or special equipment or rooms for usability testing.

How do you start?

Identify key people resources: database person, testers, developers, project manager, analysts. Then identify how much time they have and what other projects they’re working on.

Resource allocation is about juggling key resources between projects. This way you make sure all the projects can move forward.

On a deeper level, you might see why some developers or other resources are very popular for different projects and others are not- find gaps in your team skillset so that you can improve that.

Please comment and discuss what were your experiences in running a project. What were your main concerns and key points? How many ColdFusion developers were engaged in the project?