Time to “pop the hood” on ColdFusion! I’ve given you the simple, superficial reasons as to why  ColdFusion rocks: speed, security, modernization. Now, let’s see the nuts and bolts that make ColdFusion shine! 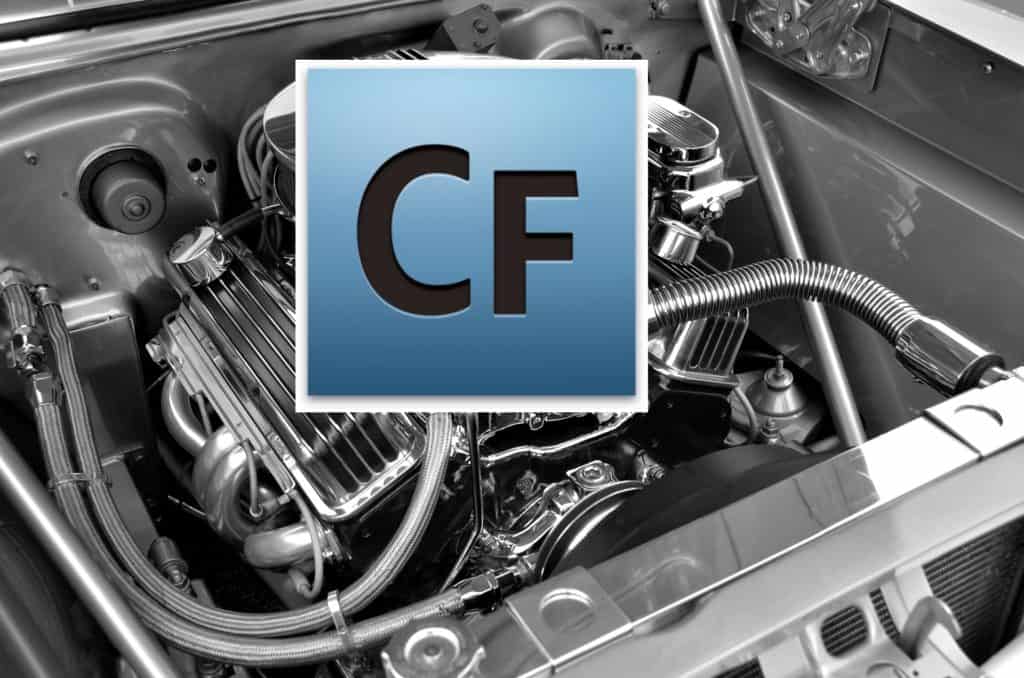 Here are seven key reasons CFML is better than other languages our there. ColdFusion is:

Put them all together and you have the most powerful, modern programming language around.

The average surfer uses a different definition of the word “rad”, but ColdFusion developers have a right to use the phrase all the same. That’s because Adobe designed CF for RAD — Rapid Application Development.

The RAD principle puts speed at the center of ColdFusion’s work, meant to turn out apps at a blistering rate.

The time your developers spend coding becomes more efficient, opening the door for them to work on other projects and updates. ColdFusion’s emphasis on RAD increases developers‘ productivity by double digits! You can also have more developers working.

That’s because developers and programmers can start coding and designing an application faster in ColdFusion than with other programming languages.

Java, for example, is much slower than ColdFusion at turning ideas into reality. According to Suresh [LAST NAME AND JOB TITLE/EMPLOYER TO BE ADDED], it takes on average 10 lines of Java code to match three lines of CFML. Multiply that ratio over time, and developers save hours of needless typing every week. (Remember that every line of code multiplies the chances for a bug.)

“The heavy lifting is done by the ColdFusion internally,” Suresh said. “We want our developers to do more for less. So that is one thing which would always be better in the ColdFusion world because the language is designed around that.”

One of ColdFusion’s biggest advantages? Almost any novice programmer can learn CFML — fast! Plenty of courses, suggested curriculums and How-Tos offer a roadmap to CF bliss.

Novice developers have better odds of turning into CF pros. They aren’t burdened with past habits and knowledge of other languages. Their clean slate lets them learn the language faster than more experienced programmers.

Much of the syntax and behavior of the language is familiar to even veteran devs. The built-in shortcuts using tags and CFCs soon become second nature. This means experienced developers transition to CF in one to two weeks. Compare that with the months needed to learn .NET or Java!

The numbers speak for themselves! 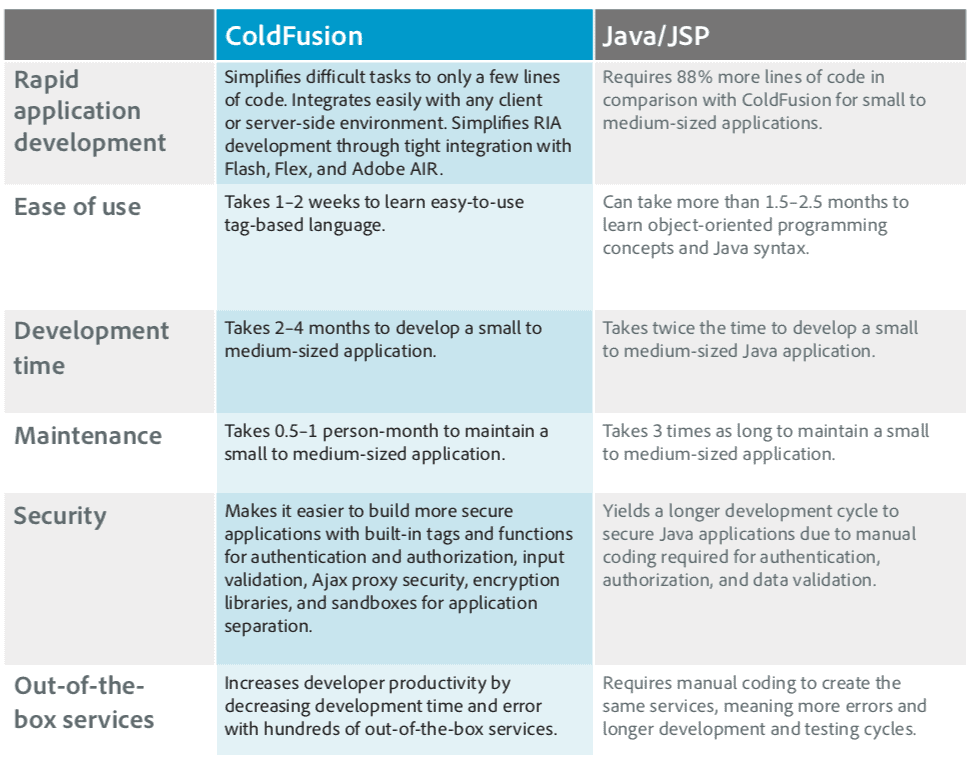 Are you a Mac or a PC? Or neither?

ColdFusion is the Swiss Army knife of programming languages! Only a few rare hurdles can stop it. That makes CF more powerful across a broader range of deployments than any other language. For example:

4. ColdFusion grows with your company

One of the biggest worries all CIOs face is bouncing users. There are some cardinal sins you cannot commit against users. These include:

These can all make or break a new product or app and send potential customers running.

These outages are most often caused by traffic spikes, with a flood of users rushing to your app at the same time.

CF apps can handle these traffic spikes with ease. You can — you must — write and design apps with scalability in mind. Capacity planning helps keep your app from crashing when traffic is at its peak.

Related: Modernization of Adobe ColdFusion (More Secure Than Ever)

By building contingencies into your app to handle bigger loads, app slowdowns, or even worse, server crashes, can become a thing of the past.

Once you’re comfortable with the architecture and capability of your app, you can load test to predict how your app will behave when it’s uber popular.

These prudent scalability measures help ColdFusion save you from your own success.

Adobe’s most recent modernization of ColdFusion included many new built-in functions. More are coming in the next iteration. These additions speed up the coding process while making your apps more secure.

The platform now incorporates commonly-used lines of code. New date functions, queries, and XMLs, among others, shorten the amount of code needed to invoke these tools.
This atop already-existing functions such as creating PDF documents or database access mean ColdFusion reduces keystrokes at no cost to utility.

Check out the full list of functions here. You’ll see how one line of code replaces many.

If you’re one of the many carpal tunnel syndrome sufferers, you’ll be grateful for the time saved.

6. ColdFusion’s other -ilities: portability and extensibility

Modern work life requires freedom. Freedom of movement. Freedom from offices or desks (occasionally). ColdFusion offers you that freedom, with portability tools designed to fit with the “remote work” ethos.

CF comes with a portable testing environment called CF Builder, which lets you work on CFML on the fly. This could give you access to an app still in development, or let you debug existing code from anywhere. This portability also transfers over to other projects.

It lets you create several apps which you may use under similar conditions. Or will apply similar configurations across several servers.

ColdFusion Builder which comes with CF and object-relational mapping support means a new app can emerge from roughest of outlines. CF Builder is a mold you can reuse, over and over.

ColdFusion also offers extensibility — the programming equivalent of repurposing and recycling. This is true for ColdFusion Components, or CFCs.

CFML’s natural extensibility lets them share their methods and tricks with other components. This makes them far more useful than ordinary objects.

They can even be self-referenced and self-checked, such as the “GetComponentMetaData” extensibility function.

This means that over time, your department can develop a host of ColdFusion Components which line your company’s code. As this arsenal of components grows, your IT team will become more and more efficient.

OOP shortens the time from an app’s conceptualization to launch by months. But while objects in other languages have their own niche, in ColdFusion they are CFCs.

ColdFusion Components offer all the functionality and ease of an object. And they are summoned with a simple line of code.

These CFCs make object-oriented programming the standard when using ColdFusion. CFCs are:

When deployed smartly, CFCs do the double-duty of objects while also offering extensibility.

Harping on about the immediate advantages of ColdFusion underplays the other hidden tools built into the platform. Taking advantage of these other benefits can increase the utility and return on investment you and your company reap.