In the Spring of 2015, a software glitch was discovered that may have had the most grave of consequence. The bug was detected in the target detection software of the United States Air Force’s F-35 Joint Strike Fighter function. When flying in formation, the jets were unable to correctly identify missile targets. The planes could not differentiate between a single or multiple targets. This caused one news agency to report that the warfighters were seeing double. This mistake ended up costing millions of taxpayer dollars and precious man-hours.

The entire situation could have been avoided with one simple software fundamental. Testing. Failing to perform testing on your CFML project may not be as consequential as the F-35’s situation. But it may have negative connotations for your project or your company. By taking a look at the fundamentals of testing for your ColdFusion projects, we can see just how vital it is. 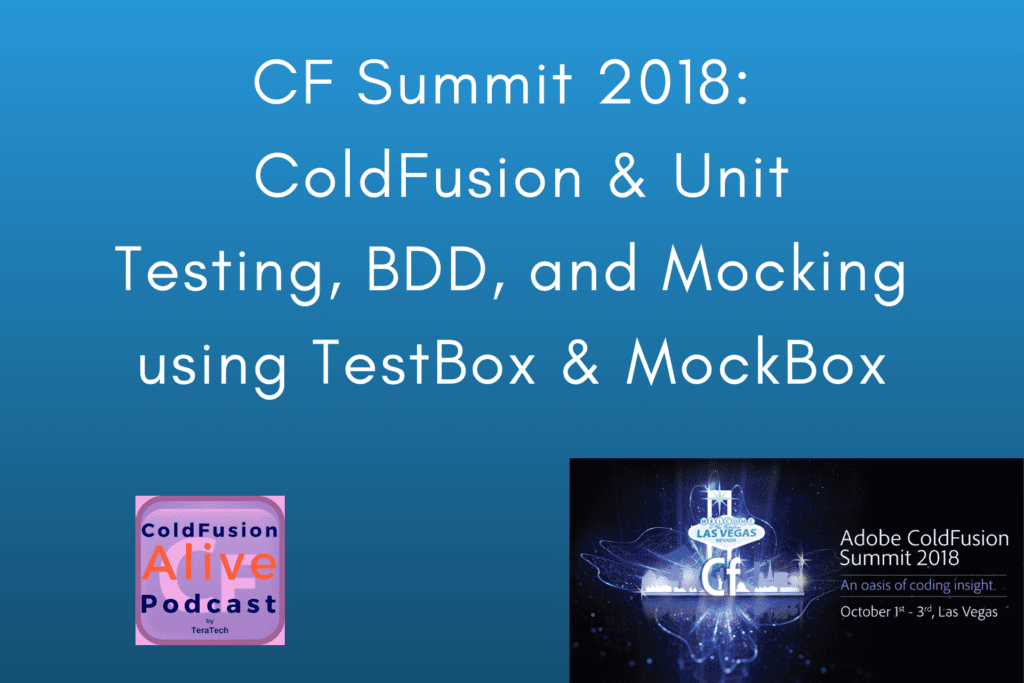 Let’s get down to brass tacks here. Why is knowledge of testing, development strategies, and automation tools important? Failure to do proper testing can lead to many more post-deployment bugs which can hurt your company’s bottom line. The costs for extensive rework greatly surpasses the time it takes to do things right the first time. It is always better to do a little predeployment preventative maintenance than post-production repair. It’s that simple. Understanding how testing and development strategies work are integral to making that happen. Next, automation tools are a godsend. They help your development team achieve maximum efficiency for their testing and mocking phases. Don’t waste valuable company resources testing and mocking manually when it can easily be accomplished via automation.

There are many great advantages for performing Unit Testing.

The first of these is finding your problems early. There are few things more frustrating than finding lots of bugs and problems in your code—especially after deployment. Unit testing can help alleviate those frustrations. By running tests, problems are more likely to be found earlier in the development process. You can avoid spending extra time and resources to repair problems if you catch them in the first place. Also, poorly written code can be very difficult if not impossible to test. Unit testing eliminates this problem. By unit testing early, you can readily find poorly written code prior to having an error pass by undetected. This is done with broad scale testing methods. Not only can you find problems early, you can easily pinpoint their exact location with unit testing. Examining small pieces at a time works similar to a GPS system. You will be able to see exact “coordinates” to your problem areas. This makes solving potential disasters much easier.

Unit testing also simplifies integration of code. Uma Ghotikar suggested writing the test for the smallest piece of code possible when performing unit testing. She does this for a very practical reason. If that minute piece of code passes its testing, it can be easily reused without further testing. That is because it has been previously verified. This can help tremendously with integrating your code and expediting the code writing process. Unit testing also helps to facilitate changes to your code and overall project. If the code changes, it will be easier to locate what else needs to be altered. This will provide a proper operation for your code.

Another great advantage is the speed at which unit testing may be conducted.

Unit tests are exponentially faster than general testing due to the relatively simplicity of the tests. Along with, it is very easy to allow for automation of these tests for your CFML project by using tools such as TestBox and CF Selenium. Not only does the speed of testing become more efficient, but so does the area of coverage. All parts of your code is thoroughly combed through to provide you with the most accurate findings. When using automated testing, this is often shown as a full report after completion showing problems and their severity levels.

Another great advantage occurs when you write your unit tests before you code. This can allow you to define where your code needs to raise an error. However, when writing unit tests there are some recommended guidelines you follow to ensure your best testing experience:

Unit testing is very closely associated with TDD (Testing Driven Development). TDD states that testing should be created prior to the writing of any code. By doing this, your end result is dictated by your code. You write code that fulfills your tests in order to achieve end production. TDD normally occurs in a five step process.

This process can be commonly referred to as Red-Green-Refactor. These tests are written from the viewpoint of the developer. As stated above though, there are many different types of testing.

Unit testing and TDD are considered as more of a low-level approach. BDD is a much broader form of testing development. It is the more agile and user-focused approach. BDD is not so much a different form of development but more of an evolution of TDD. BDD tests are centered towards a system’s behavior. With this style, you create features that create scenarios which test behaviors your application is supposed to have.

Uma Ghotikar breaks down BDD with a very simple example. If a customer fills out a form on a website and hits submit, the expected response behavior is a verification notice. Now, a series of questions needs to be asked.

This signifies the behavior your system should have. The response should be properly sent went a user acts upon it. By developing to user behavior, you can make sure you have the proper outcome desired.

Using BDD tactics has many advantages but there are some essential things that need to be in place before you can start.

So, what are the “Given-When-Then” formula and “Role-Feature-Reason” matrix?

The Given-When-Then formula is a very simple template used when creating BDD tests.

The Role-Feature-Reason matrix is used to help in the creation of user stories.

Example: As a ColdFusion developer, I want free Containerization software so that I can better scale my CFML projects.

Once you have defined your BDD essentials, you can start to experience the advantages offered from BDD.

54% of ColdFusion developers still do not use any testing and mocking frameworks. This percentage is almost the same as last year's. When will they get the message that taking time to automate testing cuts down on time debugging later? Thankfully, there are a number of automation tools that we can use to help with developing our CFML projects. TestBox from Ortus Solutions is one of these tools. It comes with a testing framework, runner, and assertion and expectations library. TestBox takes your testing and development to a whole new level. Based on BDD principles, it allows for clean obvious syntax when testing your ColdFusion projects. Along with BDD, TestBox supports MX style and xUnit style testing more associated with TDD.  According to Ortus Solutions, TestBox is capable of many more functions than just BDD and TDD style testing. These capabilities include:

TestBox is very simple to install and start using. All that is required is for a single line command to be entered into CommandBox, Ortus Solutions’ CLI manager. You may choose to install either the bleeding edge version or most current stable version of TestBox.

“A mock object is an object that takes the place of a ‘real' object in such a way that makes testing easier and more meaningful, or in some cases, possible at all”. -Scott Bain (Emergent Design The Evolutionary Nature of Professional Software Development)

During unit testing of ColdFusion CFCs, you will reach a point where a single class will have multiple external dependencies. Therefore, in order to properly test this particular class, we must be able to mock and obtain full control of this behavior. This is vital to the principles of unit testing which state that a unit must be tested in isolation. Mock objects need to be created. They will act as test oriented replacements for collaborators and dependencies.

These mock objects may be created manually, but this is where MockBox shines. MockBox is an automation tool used to help you mock dynamically and at runtime. Using MockBox helps you to easily test the behavior of components as you now control all expectations. As your object oriented apps become increasingly complex, mocking becomes essential. However, standard mocking has its limitations. By using MockBox, you will be able to apply a TDD style methodology to your unit testing and accelerate it.

There are many ways to ensure that your ColdFusion projects turn out great. It is very important to test and mock your developing projects. Don’t get caught off guard by not doing proper testing. Break free from the trend of not using appropriate frameworks. Give your CF apps the best chance of success by using them. These are just some base principles to unit testing, BDD, TestBox, and MockBox. Through practice and use of these development tools and methodologies, you will be able to produce quality CFML applications every time.