Eric Peterson talks about “Modules Make Your Projects Have Superpowers” in this episode of ColdFusion Alive Podcast with host Michaela Light. He is a CFML and Javascript developer at O.C. Tanner in Salt Lake City, Utah and more recently with Ortus Solutions (ColdBox, CommandBox, etc.). Eric is also one of the speakers at CFObjective Conference. 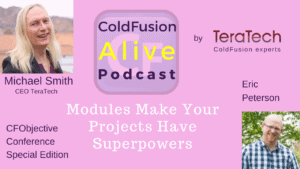 ColdBox Modules are the preferred unit of code reuse in ColdBox applications. ColdBox Modules are extremely powerful and can provide anything from a simple component to a full self-contained api module. This talk will showcase some common module types in ColdBox, provide tools for quickly scaffolding shared modules, investigate testing modules (both with and without an embedded ColdBox application), and sharing your modules with the world.

Eric Peterson is a CFML and Javascript developer at O.C. Tanner in Salt Lake City, Utah and more recently with Ortus Solutions (ColdBox, CommandBox, etc.). He attended the University of Utah and received a degree in Information Systems thinking he would hate programming as a career. He started programming in CFML (and in general) in 2012 and has never been more happy to be proved wrong. He is the current maintainer of ColdBox Elixir and a prolific module author on ForgeBox.io. He loves creating tools to help bring CFML up to date with other modern languages and communities. In his free time, Eric loves to participate in theater, musicals, and to spend time with his wife and two boys. He can be found on Twitter, GitHub, and on his blog. 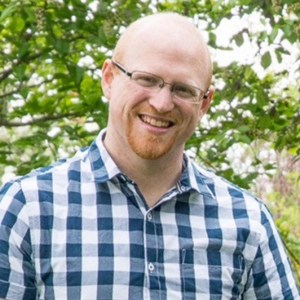 Michael:           Welcome back to the show. I'm here with Eric Peterson, and he is the module superman. He's written over 40 modules in ForgeBox and he's giving a talk … We're going to be talking today about modules make your projects have superpowers. He's giving a talk cf.Objective in a few weeks, and we're going to be looking at what exactly a module is and why you'd use modules, where you can find pre-written modules, how you can save time with them, and also you don't have to use them with ColdBox. You can use them with other frameworks so he's gonna talk about that. Also, we're gonna look at some of the ways you can use [inaudible 00:00:40], and putting together a query builder with modules, testing, and even how you could view the whole ColdBox framework itself as a module. If we have time we'll look about, because Eric only joined the ColdFusion community a few years ago, but he's been very prolific. So we'll talk about how it's different being a new ColdFusion developer versus a, how should we put this politely, the seasoned ColdFusion developer. So welcome Eric.

Eric:                    The easiest way to define the module, is probably to define it in terms in other communities. It's analogous to a Ruby Gem, or a WordPress plugin, or even a MPM package, if you know those languages. It's a self contained bundle of code, that can be reused across different projects, and even different platforms, like the web for ColdBox, or another framework, and even CommandBox on the Command Line.

Michael:           And I guess the technical term here is encapsulated. The code is self-contained, doesn't depend on other stuff-

Michael:           You can just plug it into your program, and away it goes and does what it's supposed to do.