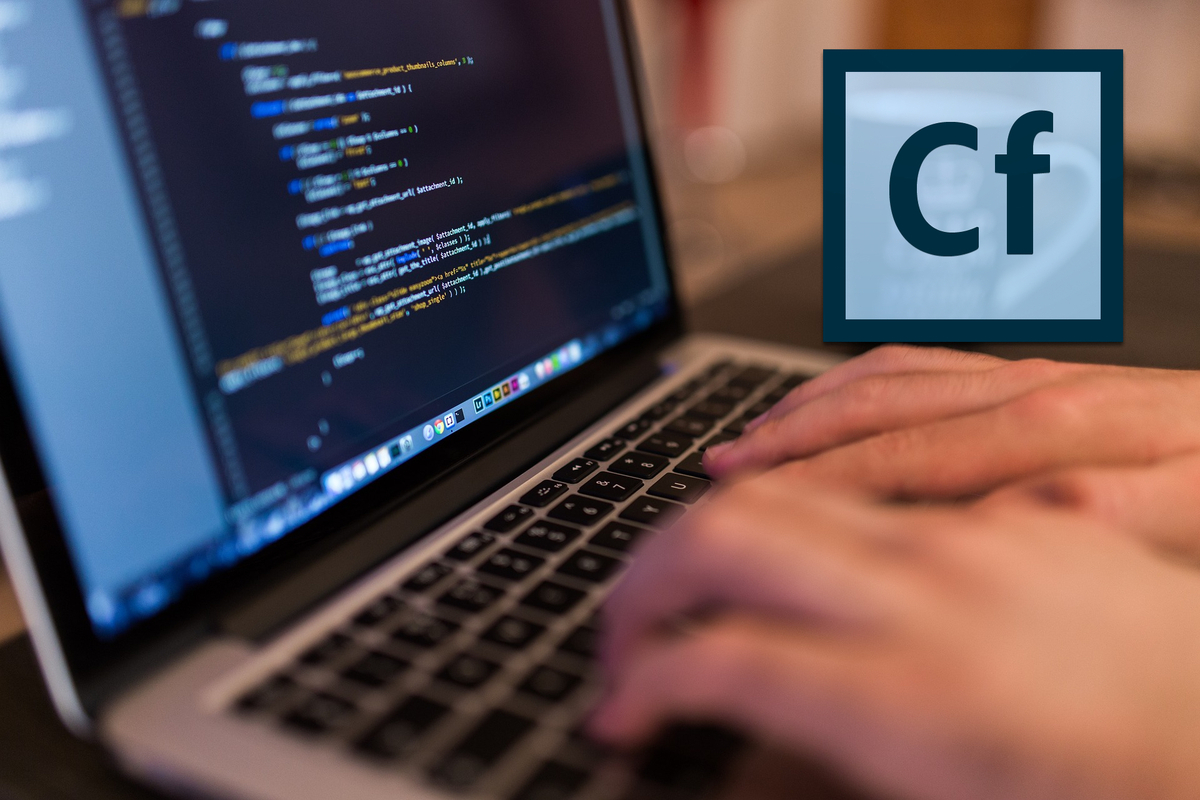 The less time your developers spend coding, the better.

As any ColdFusion expert and consultant will tell you, we constantly run into companies using only select parts of ColdFusion and not its full potential. It’s like a chef with a huge spice rack who only uses paprika.

That means incorporating everything ColdFusion has to offer for developers, from productivity tools to coding tricks which reduce the number of keystrokes.

Adobe’s development platform offers a ton of ways to maximize efficiency while creating a great app. The key is to know Adobe ColdFusion well enough to exploit its full potential.

To that end, let’s explore some of ColdFusion’s biggest strengths which so many users miss out on:

Let’s talk about it!

ColdFusion is built for RAD

Remember when apps were wonky and generally… sucked? Well, that’s the pre-RAD era.

How many complex apps are released bug-free and perfected on the first try? None. Zero. Even with extensive in-house beta testing and tinkering, something will arise “out in the wild.”

RAD, essentially, gives up the search for imperfection and favors speed an innovation. It basically states, “You’re going to find the imperfections faster if you let an app roam among users.”

Anyone looking to innovate knows speed can mean the difference between releasing a game-changing app, or being late to the party, being met with “Oh, we already have an app that does something similar.”

Thankfully, RAD is ColdFusion’s bread and butter. It does that in two ways.

ColdFusion’s creators were quick to make their development platform integrate with the DevOps philosophy of app development. This approach — now industry-standard — allows the development and operations teams to work in tandem on an app, collaborating and meshing ideas rather than working in isolation.

Development used to involve a confounding, weird process where teams worked on their singular part of an app in isolation. They’d then come together and glue together their disparate creations to make a Frankenstein’s monster of an app.

That method is, thankfully, a thing of the past. RAD’s a speed-intensive approach to app creation which emphasizes efficiency and quick turnarounds over nearly everything else. And for good reason.

I’ve seen DevOps rejuvenate and speed up projects and apps which were written off as lost causes.

But adopting and implements DevOps isn’t ColdFusion’s only RAD trick.

The power of ColdFusion — its RAD-ness — comes from its language, CFML, which has many speed-based features baked in to encourage efficiency.

The language was once tag-based like HTML, which offered its own perks and downsides. Now modern developers use ColdFusion’s script-based add-ons to write and develop apps, similar to many other development platforms.

They spend less time typing as a result! Studies have shown three lines of CFML is equal to about 10 lines in Java.

What does all this mean? A faster turnaround from app conception to testing. That means your germ of an idea can reach the beta-testing stage faster than it would using competitors such as Java.

In fact, some companies see double-digit increases in productivity when using CF.

All this means much less coding for your developers once they’ve mapped out a new app or feature they’d like to integrate into your company’s offerings.

This extension of the ColdFusion Markup Language has become the most popular way for developers to code with CF, surpassing the once-popular tags-based model.

Think of it as a language within a language, with less overhead and typing than the original CFML.

CFScript resembles other familiar programming languages such as JavaScript. This makes the transition easy for developers that have just started learning how to code in CF.

Yet it’ll also be an easy addition to a veteran ColdFusion developer’s toolbox. CFScript uses all of ColdFusion’s expressions and functions, and accesses all its variables. No need to translate within the native CF platform. The decade-old ColdFusion veteran could adopt CFScript within days — I’ve seen it happen.

CFScript also has additional tools not available in its parent language.

For example, it lets you read and set variables, loop and process on a ColdFusion server.

CFScript is also good for:

Among all of ColdFusion’s tools, Components may be my favorite. It’s the developer’s equivalent of a 3D printer in a mechanic’s shop.

Don’t have the precise tool you need? Build it yourself! Then use it over and over! The initial investment in time to create the CFC is always returned several times over once your developers begin using them within an app’s code.

ColdFusion Components, or CFCs, combine related functions into a single, bespoke tool which you can reuse throughout different parts of your application.

This lets user-defined functions and variables be deployed within code, rather than awkwardly contorting CFML to fit with your app’s needs.

ColdFusion’s biggest asset may be the network of incredibly smart, experienced developers and consultants working on making it an even better development platform. There’s an entire group dedicated to building tools and add-ons to speed up the ColdFusion platform, while protecting developers from common mistakes. Some of them work within Adobe, while others build the tools from outside. Regardless, all of them help make ColdFusion a much more efficient and powerful application.

Some of these help detect failures, security issues, and performance upgrades which can make the development process, and coding, much faster.

ColdFusion is easy to learn

ColdFusion’s ease of use and elegant code, especially when deploying CFScript, makes the platform easy to adopt and quick to master. Even recent hires or fledgling developers can pick up the development platform faster than other languages.

Onboarding new developers, or teaching existing developers new tools, is much easier. Why?

The language itself is simpler. Its syntax builds upon existing languages and adds its own shortcuts thorough ColdFusion Components and other tools.

This cuts back on tedious learning curves, where a developer slowly turns into the employee you knew they could be when you hired them.

Adobe, TeraTech, and many others also offer resources that help developers learn the language quicker. Just check the table below to see how ColdFusion compares to its main competitor, JavaScript. 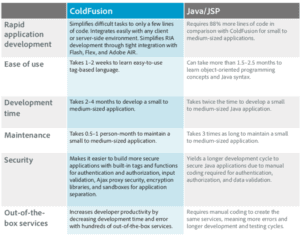 You cannot take a turn at ColdFusion development without knowing the full scope of the platform’s potential. The sooner you and your team discover its capabilities, you’ll type less yet spend more time innovating.