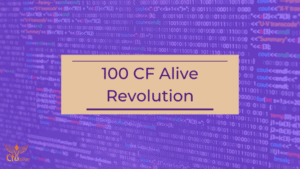 ColdFusion Alive started as an antidote to a lot of negativity, isolation, and nay-saying within the developer community, especially among those using Adobe’s development platform.

For years, I’d respond to claims that ColdFusion was deader than Jimmy Hoffa. That it was “legacy.” That it couldn’t compete with its modern, newer competitors. It was a struggle I shared with many other CFers I knew and considered my friends.

And yet while we heard all these claims about ColdFusion’s demise, we still keep drawing in clients. Many clients. Some with very deep pockets. All looking for someone who specializes in ColdFusion and can make their web apps and sites even better.

There was a disconnect. If ColdFusion was dead, why were TeraTech and the many other CF-oriented firms like it still in business?

The answer was to start something — a movement, a hashtag, a club — of like-minded developers and CF aficionados. People willing to not only use ColdFusion but evangelize on its behalf.

So in March 2017, the CF Alive Revolution was born.

How’s it coming along? Many blog posts, one book, talks, and 100 podcast episodes later…

What is the CF Alive revolution?

Nolan Erck, Luis Majano, and, of course, Adobe helped me start the revolution by being early guests (Thanks everyone!). Soon, I was able to bring in a veritable who’s-who of the ColdFusion world, to discuss topics that range from nuts-and-bolts CF issues to containerization, and even mental health issues.

The podcast, frequent conferences, and continuing expansion of ColdFusion helped foster evangelism on behalf of the platform. We were lucky to be joined by others such as Brad Wood, Nolan Erck, Charlie Arehart, and the many other CF bloggers and champions.

They were helped along by one very clear advantage: CF is a vibrant and fully matured development platform. It can make complicated, data-driven apps using much fewer lines of code, saving you time and money.

Adobe did its part by constantly updating ColdFusion. The 2018 variant came out, alongside many patches. And now, ColdFusion 2021 is on the horizon, offering a slew of modern additions to all the useful tools already built into the development platform.

The ColdFusion Alive revolution stuck around because… well, Adobe and the community did their part to keep the development platform going.

I had a celebratory get-together via podcast (of course) and looked back at all the changes that happened since CF Alive launched, with most-frequent CF Alive guest Nolan Erck joining the celebration.

We both dissected why Adobe’s platform has remained fresh.

“Overall, it never went away,” Nolan said. “It’s not like ColdFusion died.”

And Nolan’s right. Among the many development platforms and languages in use today, Adobe ColdFusion has arguably the most modern development environment. The platform has adopted a growing list of matured development techniques and strategies, including:

Why was the CF Alive revolution started?

ColdFusion Alive began with a simple goal: to show ColdFusion as being much more modern, vibrant, and secure than the naysayers would have you believe. We also wanted to create a workshop/water-cooler style space where people can talk shop and geek out over new tools and strategies for working with ColdFusion.

So we developed this broad outline of what we’d want: a themed discussion with the potential to shift into a broadly-focused episode: Amazing Adventures in CF WebSockets with Giancarlo Gomez, from March 2017! I’m happy to say I don’t think I aged much.

It led to a steady stream of CF gurus, tinkerers, and deep thinkers who helped move the platform forward via innovation and sheer force of will.

And it was an excellent time to get started on such a movement. There was a lot of depression and burnout in ColdFusion’s broader universe.  Many of the companies using CF aren’t tech-oriented, and simply want the best tool available. It caused many of their company’s web apps to stagnate in legacy hell, with companies still using outdated versions of ColdFusion.

Many work 9-5 at their companies, far from the glamorized developer lifestyle of massive-windowed offices with massage rooms and ping pong tables we see at huge tech firms.

Nolan thinks there are more 9-5 CF developers who are living in a bubble, developing within the narrow scope of what their company requires of them and not looking too far beyond those bounds.

Worse yet, the CIOs and developers at many of these firms aren’t perceived as key to a company’s operations, creating a depressing environment to work in.

Meanwhile, other languages were gaining a foothold in the market. .NET remained the “safe option” for many CIOs, who’d rather tell their tech-ignorant bosses that they can safely use Microsoft’s tools. The supremacy of Microsoft was hard to break away from.

There was a general perception of things falling apart for the development platform, despite new versions constantly updating and adding to CF’s capabilities.

So much so, a massive 72 percent of developers in one survey said ColdFusion was either dying or legacy. The platform needed someone to advocate on its behalf!

The revolution — including the podcast and a book — were created to change these trends by helping the existing community connect, learn, and grow together.

What did the revolution change?

Developers may feel they are legion, but we are still niche in comparison to, say, football fans. That group whittles down even more when you start splitting into factions representing specific platforms and languages.

But developers can still affect products or services if they make a cumulative push for change.

There’s an inherent danger in trying to gauge the CF Alive’s reach and influence. I like to think it’s one drop in the stream of the ColdFusion discourse. This podcast of mine, the blog, and the books… they’re all contributions and occasionally provide cliffsnotes to the ColdFusion conversation.

And so, here are just some changes that have occurred in the time since CF Alive was launched:

It’s been over 100 episodes and three years since I got the CF Alive revolution started. All these years later, the anniversary comes just as Adobe is releasing a new version of its development platform: ColdFusion 2021. Still vibrant. Still modern. Still thriving. Still the best way to create web apps that’ll save money and help your company succeed!