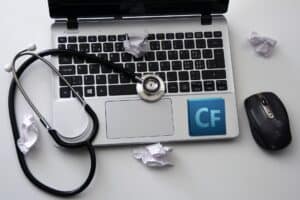 CIOs and their teams go to great lengths — and expenses — to put together the perfect, pristine web app.

Yet things can go awry. Some web apps don’t live up to their potential. Happens in ColdFusion, like any other language. I see it all the time doing my ColdFusion consulting work.

These problems become apparent immediately. Resist the urge to blame ColdFusion itself. Especially when stretching your app’s ability to cope with high traffic.

In fact, a web app that goes haywire during a peak load of traffic can betray many other problems.

How can web apps suffer?

Web apps are imperfect little creations — much like the developers that code them. They grow and change as their roles evolve and expand. And all those additions and reconfigurations open the door for errors.

Left alone for too long, these web apps can do more than just have a glitch. They can suffer to the point of driving away users. The biggest symptom of an app breaking down is “The Wall.”
My friend and fellow CFer Mike Brunt describes The Wall on his blog, the CFWhisperer, calling it “that perfect storm of occurrences that suddenly and within seconds brings a web application to its knees.” To put it in layman’s terms, it’s a crash.

The Wall is also the first giveaway that something is amiss with your app. But first, it’s important to know the causes.

The wall is a stacking up of all available application threads at once. You can almost see it coming. Its first symptom is a sudden and dramatic dip in performance.

Several factors can cause it:

Any of these, or several in tandem, can send your app careering into The Wall and crash it. It’s caused by an unanticipated load.

The Wall is a symptom, not the illness

An app crashing under heavy loads is an all-encompassing menace that sometimes uncovers other problems in your ColdFusion app. These potential problems include:

The initial setup of ColdFusion is key, setting the parameters for almost all the other work and products you make with the app. If you didn’t install all the bits and pieces of CF properly, you could set yourself up for a date with The Wall.

A crash could be a sign your app and servers aren’t communicating. Making sure your network is configured properly could spare you a lot of headaches.

The code itself could smell. Whether it be bugs, inefficiencies, or deadwood, poorly written code grows slower as more people use it.

A slowdown caused by a surge in traffic could mean your tech specs need to be refreshed and upgraded. From your server blades to the machines and hard drives you use.

Any of those problems amounts to six major areas that can become problematic in your ColdFusion web app, over time or suddenly. If left to fester, they can ruin the user’s experience in several ways:

The Wall, however, shouldn’t be an accepted part of life as a CIO or CF developer. It is possible to build infrastructure that can cope with nearly any load.

How to improve your infrastructure

The best defense against a misfiring, flailing app? Tests galore.

You need to simulate worst case scenarios with your app, attacking every conceivable front so that nothing catches you by surprise.

Test your code every way you can, following Mike Brunt’s proven technique: test all code mercilessly, and don’t release it until it passes every test.

Which tests should you run? I recommend this process:

But those rudimentary tests are not all. My friend Mike Brunt has his own yeoman’s to-do list to keep your app from suffering under a heavy load:

There’s one sure-fire way to see what’s happening in your CFML, and it’s one I preach often when I’m working as a ColdFusion consultant. Check your logs early and often!

CF’s logs offer a wealth of information about the state of your web app and server, according to Brunt. When you’re troubleshooting and can’t seem to find the problem, your logs can often show you where to look. For example, this log offers information about ColdFusion and its main dependency points.Standard non multiple instance install

Also, use “enhanced metrics logging”, which keeps a tab on many threads and memory. It can be a godsend when troubleshooting.

You’ve invested the time, energy, and the company's cash into building a functioning, pristine web app. But systems fall apart in myriad ways. By knowing the most common faults accidentally baked into web apps, you and your company can avoid the hidden costs and lost time associated that come with fixing someone else’s mistakes.